Why Ubuntu 12.04 is the best desktop experience the free software community has to offer.

Unity, love it or hate it, it's here to stay. I recently gave it a try and had to just stick with it and in this following blog post, I'm going to argue why Ubuntu 12.04 is the best desktop experience that the floss community has to offer!

Let's let that sink in a little bit, 5 years, that's a lot of faith in a product. One that comes with an interface that, let's face it has had a lot of bad press over this last year and that's something to bear in mind, it's only been a year!

What really makes Ubuntu 12.04 stand out is how very different it feels to the usual Gnome/KDE/XFCE interfaces. Now each interface appeals to a certain user, this is why such choice exists in our community, but Ubuntu is positioning itself as a direct competitor to Windows and Mac in the desktop space, both of which have been revolutionizing their interpretation of the next generation of graphical interfaces.

This is the important thing to take note of, Unity is a next generation interfaces. With the recent exception of Windows 8, the Microsoft operating system has largely had the same basic interface since 1995, seventeen years of the same graphical interface metaphor.

Which is all a graphical interface is, a metaphor for a desktop.

Desks with their files, folders and staplers etc.

Since starting a career in computing most of that "desk work" is done on my digital desktop and while one could agree the metaphor of files and folders is still useful and helps visualise an electronic based task by using familiar real world concepts, the whole thing starts to break down when you need to stitch two PDF files together.

The point is that in the early days a graphical interface imitated the real world. That way new users would have common conceptual reference points, however with computers so ubiquitous in our day to day lives the metaphor doesn't seem quite as useful as it once was.

This is were Canonical have it right, we should start fresh, study how users use their computers these days and develop an interface based around how we interact with the digital. To that end they have done some user testing (here, here and here) and used that as a means to develop and improve their home grown Unity interface.

Here's where I really commend them, they developed a vision and were uncompromising in their realization of that vision. Sometimes you just gotta knuckle down and take a few beatings for sticking with your visions. Apple have been deciding what they think is the right interface for years now and it's worked for them to the point of being viewed as a leader in the Interface world. So if following an unorthodox (at least in the open source world) methodology will ultimately result in a great open source user interface then I certainly have no problem with them adopting a more rigid development method. I also take care to remember that I have not paid a since penny on this OS and that I am not entitled to anything except what I am given.

If you have not used Unity before it's a bit different, one can see where the various inspirations came from, it has a menubar at the top of the screen (a la mac), a dock/launcher to the left of the screen, which is the go to location for application management and a rather good looking overlay which allows you to search, run and manage your installed applications and documents.

Here's how my desktop currently looks: 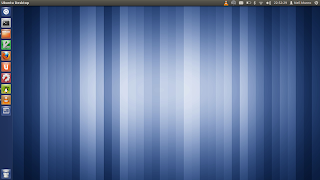 These are tiny little additions that contribute to a fantastic user interface. 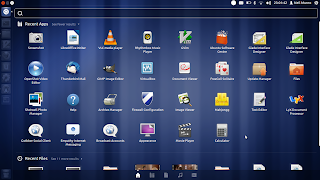 You can see several things here, in the top left you have the window controls, in all full screen applications the window controls are always located there. At the bottom there are five icons, these are known as lenses they one to filter results, additionally there's a means to further refine your search results. 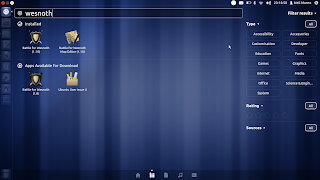 Now, you might be forgiven for thinking that it's not vastly different from say, the LaunchPad feature of OSX, but more functional.

Not a lot of difference is there?


Another big feature is the HUD, a means to perform actions that are in the menu but instead of having to click through the menus, it enables one to search the menu by just typing, like so. 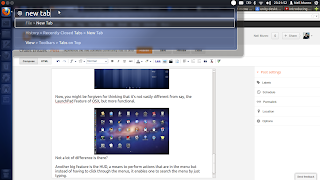 As I'm sure you can see this is something of a break in the desktop metaphor, it seems to be driven towards the concept of text input. For years I have been seeing various users using various bits of software for quick launching things based on entering a search string.

Even care has gone into the preference settings, it's a fantastically complete solution, which again allows you to search inside the preferences. 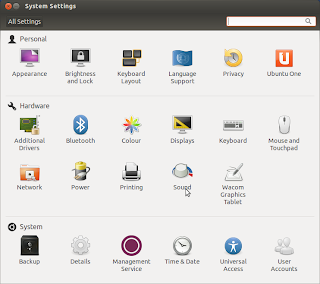 It's not just the graphics though, Ubuntu 12.04 comes with it's own cloud based file sync application (Ubuntu One) that's also available on your phone so you can use Canonical's offering over all your devices. 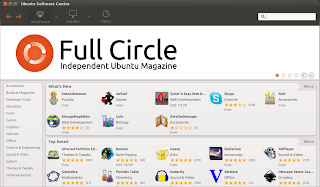 This is stuff both Windows and Mac are pushing hard towards and why should we do something different simply because it's what someone else is doing, arguing that one shouldn't do something similar that's popular sounds very much like not invented here to me.
A gret 'feature' is that the interface in all it's advanced graphical glory, can be operated entirely without the mouse, something that a short cut junkie can really appreciate, but by the same token one can still do everything using the mouse, should they choose to.

What it boils down to is the fact that Ubuntu isn't just about the interface (which is frankly stunning) it's a complete end to end solution, with an apps store, cloud integration and excellent preferences management all wrapped in a simple yet powerful next generation graphical interface.

And it's only going to get better.

EDIT: I also forgot to mention that there's also a back up and restore method that allows you to perform incremental backups, this is in the style of Apple TimeMachine and again it's integrated into a central preferences application.

There's also the Ubuntu font face, now, I don't think creating one's own type face was strictly necessary, but it looks very good and does create a unique brand, much like Mac had Monaco for years as the default font. There's merit to it, and the mono space variant is great for programming in Vim!

All these little things add up to create a very polished, functional unique branded desktop experience.
Posted by Unknown at 16:32